One of the most noticeable differences between Linux and Windows is the directory structure. Not only is the format different, but the logic of where to find things is different.

In Windows, you use this format to access a directory

In Linux, this is the basic format

You’ll notice that the slashes are forward slashes in Linux versus backslashes in Windows. Also, there is no drive name (C:, D:, etc.) in Linux. At boot, the ‘root partition’ is mounted at /. All files, folders, devices and drives are mounted under /. Though it is not apparent from this example, it is important to note that files and folders in Linux are case sensitive.

The Linux Directory Structure follows the “Filesystem Hierarchy Structure (FHS)” maintained by the Free Standards Group although most of the distributions sometimes tend to deviate from the standards.

The Directory Structure starts with the Root file system “/” and is indeed the root directory for the whole structure.The partition where / (the root directory) will be located on a UNIX or UNIX-compatible system.

The /boot directory contains the Boot loader files including Grub or Lilo, the Kernel, initrd and system.map config files

This contains the Kernel, Firmware and system related files.

Contains the essential binaries for users and those utilities that are required in single user mode. Examples, include cat, ls, cp etc.

The /dev directory contains the essential system files and drivers.

A generic mount point for temporary file systems. This comes handy particulary when troubleshooting from CDROM etc wherein you might have to mount the Root file system and edit configurations.

A rarely used directory in Linux for Optional Software Packages. This is extensively used in UNIX OS like Sun Solaris where the software packages are installed

A sub hierarchy to the root file system which is a User data directory. Contains user specific utilities and applications. You will again see a lot of important but not critical file systems are mounted. Here you would again find a bin, sbin & lib directory which contains non-critical user and system binaries and related libraries and a share directory. Also found here are the include directory with include files

Library files for the binaries in /usr/bin & /usr/sbin directory.

The /var directory is mostly mounted as a separate filesystem under the root where in all the variable content like logs, spool files for printers, crontab,at jobs, mail, running process, lock files etc. Care has to be taken in planning this file system and maintenance as this can fill up pretty quickly and when the FileSystem is full can cause system and application operational issues.

Then you have the virtual (psuedo) file system /proc which resides in the memory and is mounted under the Root holding kernel and process stats in text file formats. 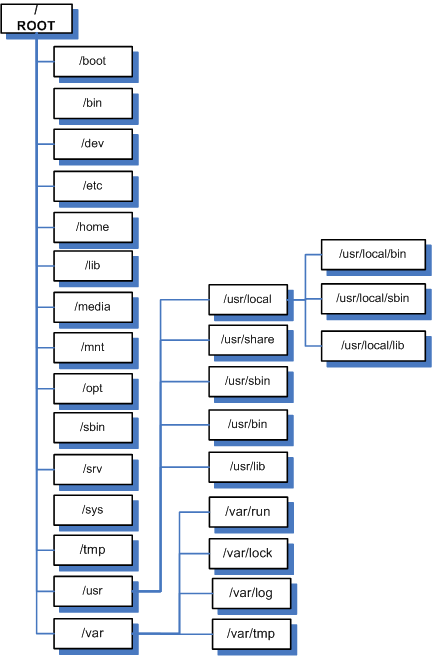